A little over a year ago I published an overview of my off-grid solar system consisting of 10kW of panels and 28kWh LiFePo4 battery. The set-up consisted of all the components to run this solar system - including charge controllers, inverter, BMS, etc. The target goal was a cost of under €10K, which I managed to achieve with some cash to spare. Now that it has been in operation for a year, let's see how well the system held up, any issues that were encountered, and what the current price of the system would be were we to build it again today. 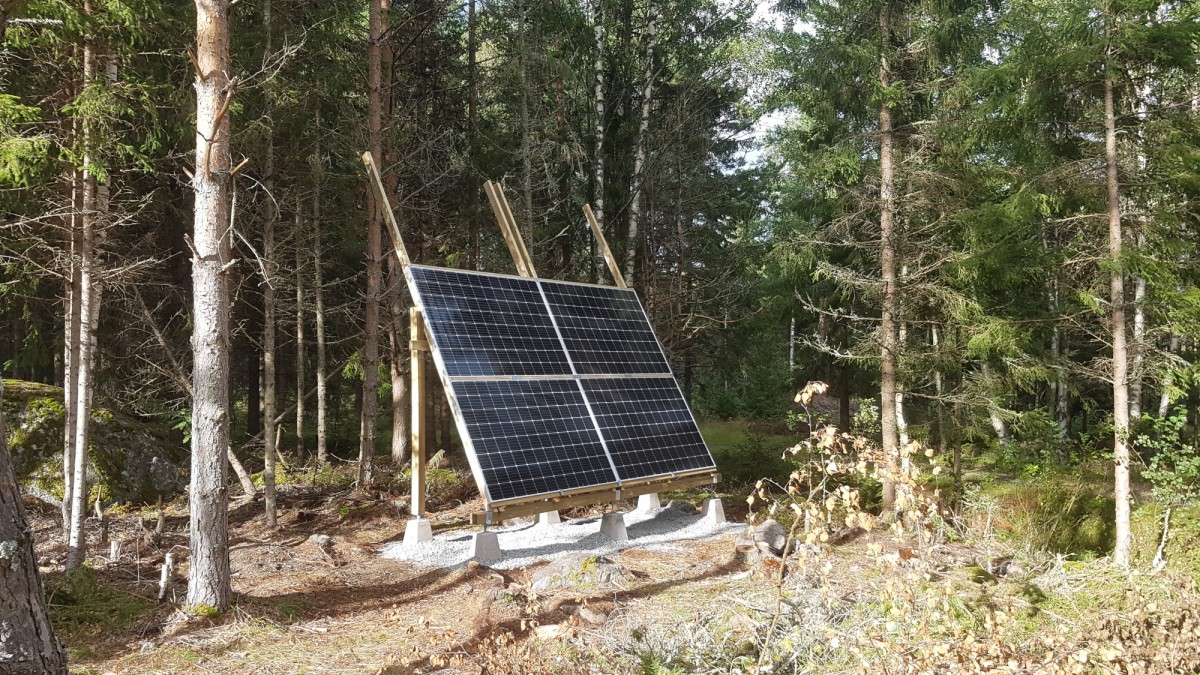 Let's start with the solar panels. I am extremely happy to have gone with these large 500W ones. Not only do they perform as they are supposed to, they look good: the 'massiveness' of them together with how it simplified (in my case) the ground mount design is a great bonus I did not expect when I got them initially. Having a large panel also simplifies wiring, needs less mounting hardware, etc. They went through several storms in the mean time, and a very long and cold winter without any issues. I've also described the ground mounts in this thread over on diysolarforum.com.

Where would you get similar solar panels today, and what would they cost? When I bought them I paid €4140 for 20 panels, or a total of €0.414 per Watt. This included shipping and taxes. The panels are available slightly cheaper today, but due to the current situation in the world, shipping has become a lot more expensive. This is something that impacts not only the cost of the panels but as we'll see later, the cost of the battery cells as well. It's also something that is probably not going to get fixed short term. Therefore, trying to source local panels is probably a good idea. However, finding 500W panels is pretty difficult, so one might have to accept that fact and get smaller panels - the 500W panels you can find in Europe (and from what I can tell the States) are expensive: €250 per panel is the cheapest I found, or €0.5 per Watt, excluding shipping. Others are €300 and up without shipping.

I still recommend my original supplier, and maybe shipping will improve in time so buying from them makes sense again. In addition, I heard good things about SanTan Solar in the US, and GWL power in Europe. Check them out: 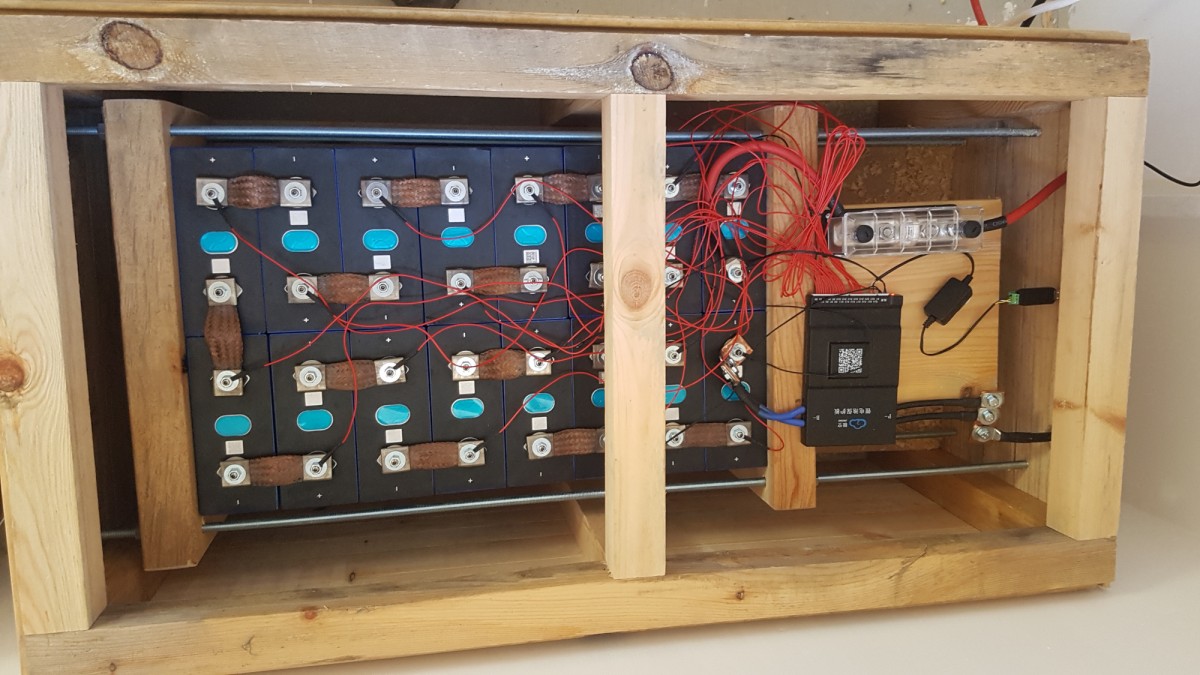 On to the batteries. All cells are perfectly fine. The insulated box I made (with compression and heating pads) for them keeps them at temperature. I've not noticed any degradation. I don't know how many cycles I've put them through, but they have been close to empty during winter months, and close to full over summer. They're not being pampered; when I need the power I will deplete them, and when I'm processing wood for winter, or drying berries/meat or canning I will use the power 24/7 also in summer.

As with the solar panels, shipping has become an issue if one would buy these cells now - and prices have gone up quite a bit as well due to high demand. In addition, there are so many Aliexpress and Alibaba vendors out there now for these cells (and quite a few scams!) that the entire thing could be a nightmare. However there is silver lining here: there are a few vendors that actually sell proper cells, pack them properly, and provide proper communication. In addition, some of the more reliable vendors have warehouses in Europe and the States which dramatically decreases the waiting time and potential issues with shipping. When I bought mine, I paid €3215 for 32 cells, each 280Ah (including taxes and shipping). To get guaranteed new cells with the same 280Ah capacity right now, you'll likely pay closer to €5000 right now. Three sources I would recommend at the moment:

The latter has stock in EU and US warehouses, the middle one has a warehouse in the US, so they could make things easier. Overall though, it's not expected that cell prices (and shipping) will drop in the near future. The demand for LiFePO4 based cells has grown a lot in the past year, and is not expected to go down. Shortages in chemicals to build these cells has also been a factor.

The BMS that protects the cells is the one component I really thought would be too cheap to be true, and I bought a few spares just in case since I thought for sure I would blow at least one. I had a couple of instances where I blew a 225A Class T fuse on the battery that I thought would have definitely destroyed the (100A rated) BMS. To my surprise, they survived my shenanigans. They've been running 24/7 for a year now without a hiccup. The spare ones are still in the box, unopened. For reference, I paid €97 (100A version) each all included.

There are now several sources that stock this BMS on Aliexpress. I list a few:

The MUST PC18-10015F 100A charge controllers hooked up to panels that can and do provide that amount of power. No issues what so ever. I only wish they came in a higher voltage version. Nothing much else I can say: power comes in, power goes to the battery, day after day, never an issue. I paid (including VAT and shipping) €485 for two units, so less than €250 each for a 100A charge controller. Same as with the BMS, I didn't think this one would last, but here we are. Prices are pretty much the same today, and shipping shouldn't be impacted too much since these things aren't very heavy.

MUST Energy has been around for over 20 years, and dealing directly with the manufacturer has other benefits I'll get to below.

I have been trying out two inverters over the past year. One was a 5kW high frequency inverter from Reliable Electric Power, sometimes known as WZRELB, the other a 6kW low frequency inverter (EP3000 Plus) from MUST Energy - same as the charge controllers. The high frequency one I stopped using and is a back-up now, stored away. It could handle most of the loads, but in the end did have some problems with specific inductive loads. Surprisingly, not the 1kW well pump, but the 150W or so ventilation system. The rest was no issue, but compared to the low frequency one the only advantage I see is the lower self consumption.

While the low frequency inverter is no Victron, it's a beast. 6kW, heavy as I don't know what, plug in everything I have at once (ventilation, well pump, waste water fan, pressure vessel, compressor, coffee maker, saw etc.) and it happily hums along at full load. Never an issue starting anything I hook up to it. Works fine with the generator to charge the batteries when needed. It has a self consumption of around 50 to 75W, which while higher than a low frequency inverter isn't really that high either. In addition, I made sure I could get spare parts; I ordered a spare power board and control board and had it shipped using FedEx from China. Cost: $150 including $80 for shipping (about two months ago from the time of writing), one week delivery time. I swapped the components to make sure I can fix it if needed, and this was a breeze. So nice to have a device one can service at this price.

At the time, I paid €625 including VAT and shipping. Shipping will probably be higher now (as I said, these units are heavy), but was about 50% of the cost to begin with. Granted, this was using a courier service by airplane, I don't know if they can ship with other means. Still, a pretty good price altogether.

The company makes several versions, from 1kW all the way to 18kW. Source:

They also make all-in-one units where the charge controller (even a higher version) is integrated into the inverter. This company is well worth checking out - they make lots of stuff. They recently started making batteries as well. 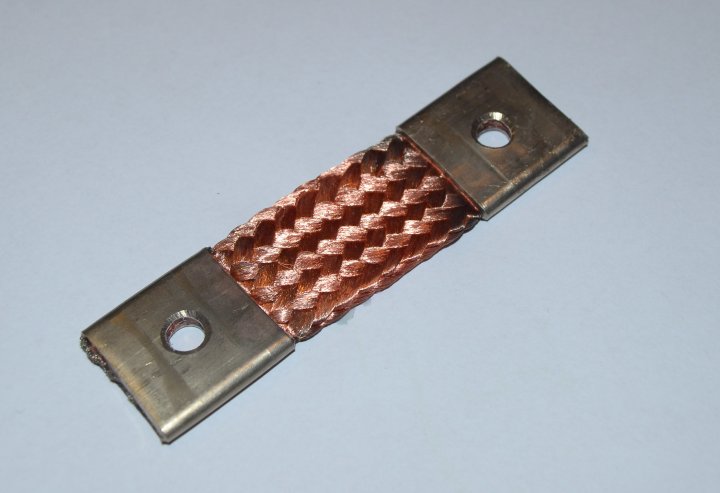 Yeah, I'm using my self made braided ones and they're in my opinion still the best. I might be biased ;) I also really like the MG Chemicals 847 between the bus bar and terminal. I've not had connection issues at all, nor do I have any issues with the BMS balance leads. The 847 really seems to 'unify' or 'equalize' any potential issues from not having perfectly flat bus bars, or differences in resistance contact from cell to cell. For me, after a year now, this is perfect.

Seriously, this is boring. I would have at least expected something to blow up, not work as advertised. I was hoping to be able to have multiple posts with stories... but no. Maybe I should do even cheaper components next time. Can't start a YT channel with this stuff ;)

As for building this system from scratch today: yes, it will be more expensive, mostly because of increased shipping costs. On the other hand, battery cell availability is much better today, with a few reputable sellers that guarantee you get new cells directly from the factory. This was more of a wild west when I built my system and definitely some risks I took back then that would not be needed today. Do watch out for the scams! Will the system built today still be under €10K? Yes, still very much possible!

Do you have any information about making your bus bars? That looks like it would solve a problem I'm having!

You need some copper braid, like this one:
https://www.copperbraid.co.uk/product/flat-super-flexible-25-mm2/

Then you need (annealed) copper pipe. This usually comes in reels, like this:
https://www.fernandoalonsosl.es/gb/copper-and-special-pieces/6390-copper...

You cut 25mm sections of pipe, and however long pieces of the braid you need. Then, start by flattening the pieces of copper (in a press, or even a vise) until you can slide in the copper braid for the entire 25mm. Afterwards, compress entirely so the braid is permanently fixed in the now flat copper pipe piece.

You can Nickel plate the end result using nickel-acetate and a power supply:
https://www.instructables.com/High-Quality-and-safe-Nickel-Plating/