Over the past decade or so I've been working on off-grid solar installations big enough to power a house, even during the long, cold (and dark) winter months here in Finland. While November, December and January remain challenging, it can actually be done - and pretty well. The issue in the past has been that doing this was quite expensive. The first implementations I built for this ran in the multiple tens of thousands of Euro and required quite some attention to keep going. These first systems relied on expensive components and difficult to manage and heavy lead-acid batteries. Over the past few years however, the landscape has changed and there are possibilities that I could only dream of even as little as a year ago. The post below details the components, where to get them, requirements, and the cost to get an off-grid solar system with several days of autonomy running for under 10K Euro. 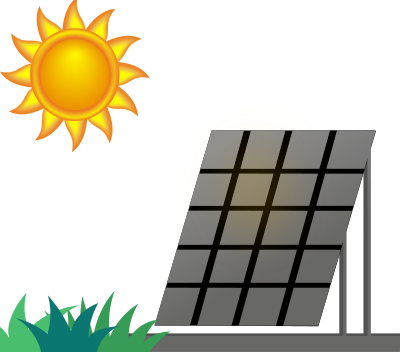 Before I begin, let's set the stage. The goal is to build an off-grid system capable of running a typical house here in Finland with several days of autonomy for 10K Euro (including the VAT and any taxes/duties). This includes running appliances such as a washing machine, dishwasher, lighting, computers, microwave oven, vacuum cleaner, etc. In addition, ventilation system and pumps such as the one for the underfloor hydronic heating. It does not include heating, hot water, or cooking in this set-up, although to a certain extend cooking using induction heating will be fine, especially in summer. As usual, it is better and cheaper to reduce your power needs first, so this includes using power efficient devices and not for example a 15 year old refrigerator.

Typically heating is done through alternative means (here with a wood/pellet burner) for both living space heating and hot water requirements. Cooking in this case will be done on a gas stove coupled to bottled propane. In summer however, hot water will also be provided by solar since during the summer months there is typically an excess of energy, which can be diverted to the hot water tank.

Because we're at a pretty high latitude (> 60 degrees), we have to take some things into account. Let's start with some solar irradiance numbers provided by this tool:

From the above graph it should come as no surprise that the winter months (and in reality, only November, December and January) are difficult for solar energy since there is barely any sun to begin with. It is important to position panels optimally for this case: almost vertical, and if you can place them across a frozen lake or snowy terrain this is advisable to get the most power. To bridge these months, we have to rely on lowering use of power (e.g., cooking on gas), and having a generator. This generator however is not used in the typical sense where you need a big one to keep powering your house. Instead, a small and efficient generator can be used only to charge the batteries. Besides the ability to rely on a smaller, cheaper generator, it is also more efficient since it does not sit there running while not using all the power it actually generates, and can run for a smaller amount of time as well.

Summer months see an excess in solar power especially for the large-ish system we'll design. In fact, if you look at the image below, the total yearly solar irradiation is pretty close to other places in Europe much further south. It's just distributed differently across the year. 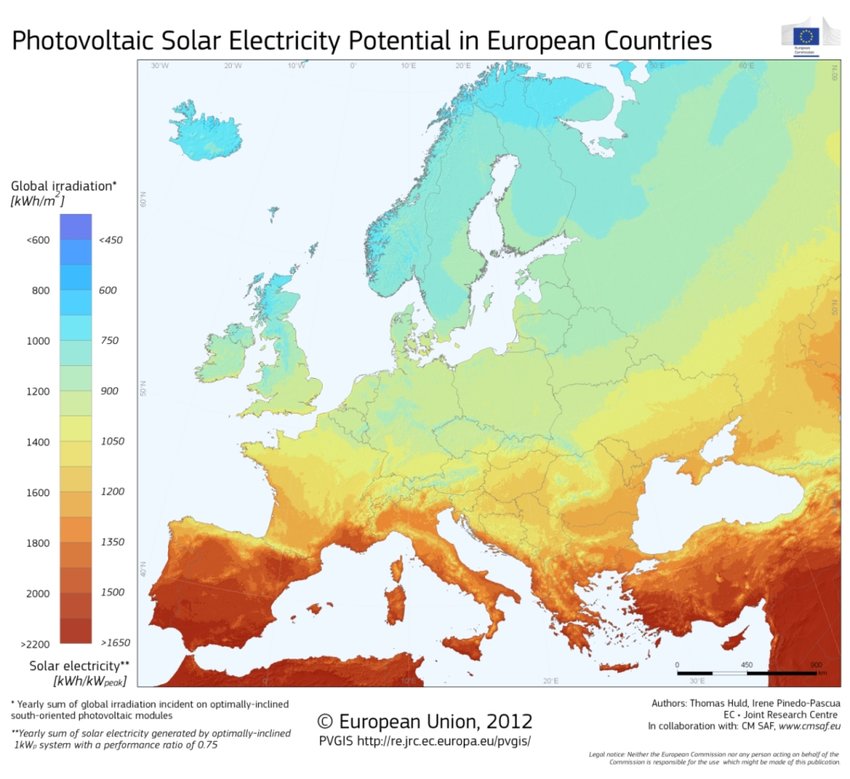 So we have to find uses for this power in summer. Cooking on induction for example, but also electrical tools such as chain saws and wood splitters can be used to process wood for the winter months. This saves the fuel one would normally use with gasoline powered tools and at the same time essentially 'stores' excess solar power for winter in the form of processed wood. Additionally, as mentioned, excess energy can be stored in the form of hot water for showering and other needs.

To maximize the amount of solar energy we can capture, we need to 'overpanel' and pick an as large amount of panels as feasible. For this system I opted to build a 10kW array, made up of twenty 500W panels. These panels are big; 96 cell measuring 1.3 meter wide by almost 2 meters tall. One could use smaller panels and just put more of them, but I liked the look of these and it saves a little on the amount of wiring needed. 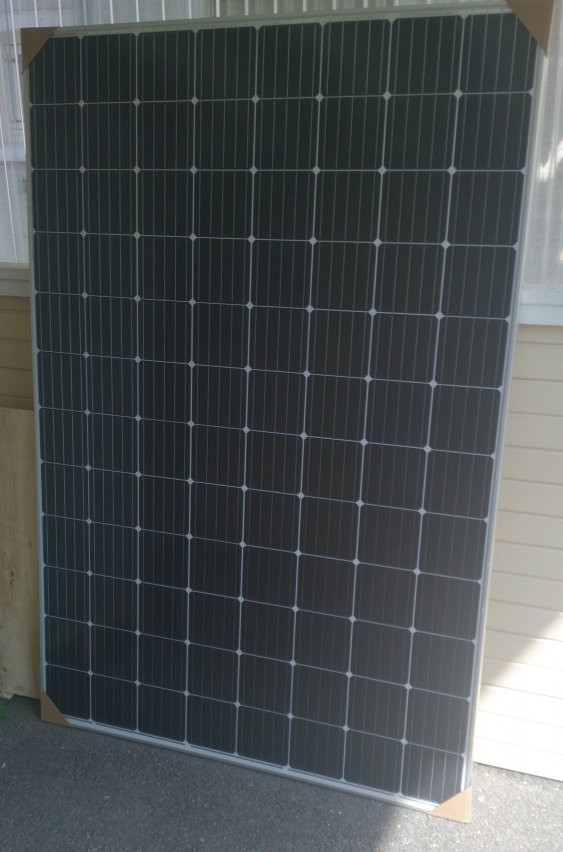 When picking solar panels, you have to keep in mind that the advertised Voc (open circuit voltage) is at 25C, and will increase as it gets colder (solar panels are more efficient when cold). To make sure you don't exceed the maximum voltage the charge controller can take, you have to keep your lowest temperatures in mind. I wrote a calculator for that purpose.

In order to bridge days with less sun, and just to maximize the amount of power we can store we need a pretty big battery bank. For this project, I wanted something that could scale when needed in the future, yet affordable and pretty large. This rules out any off the shelf products currently available, so we have to build our own from individual prismatic cells. For safety reasons, we want a stable chemistry but don't want to deal with lead-acid - luckily this exists: LiFePO4. This is a lithium chemistry, but one that does not suffer from potential thermal runaway, fire or even explosion danger. It doesn't use cobalt either, so it's possibly one of the most ethical and environmentally responsible chemistries as well. The energy density is lower compared to other lithium chemistries, but since these are static applications this doesn't really matter. In addition, it is affordable. 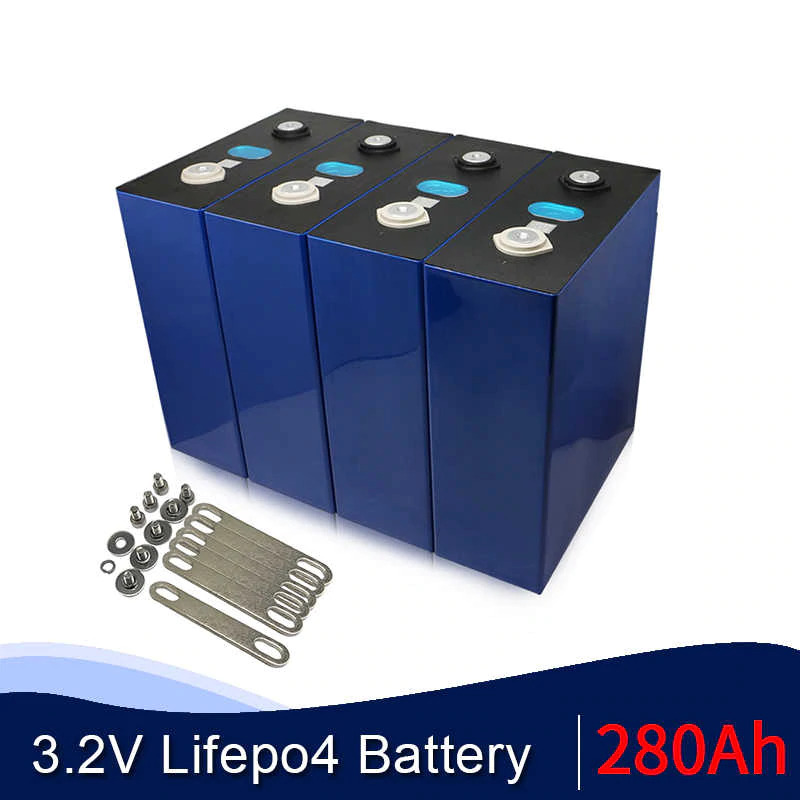 The goal is to have several days of autonomy. Assuming 5kWh usage per day (and this is on the higher side, it can be as low as 2kWh or less), I'd like the potential to have 5 days of autonomy. That means 25kWh of storage. This would have been nearly impossible a year or two ago for anything close to €10k. So what do we need to build this:

This would give you a 28kWh capacity; and it's scalable if you need more. You can just add 16 more cells at a time to keep increasing storage if needed. The batter management system is there to protect the pack and and the individual cells from things like over/under voltage, too low or high temperature, etc. 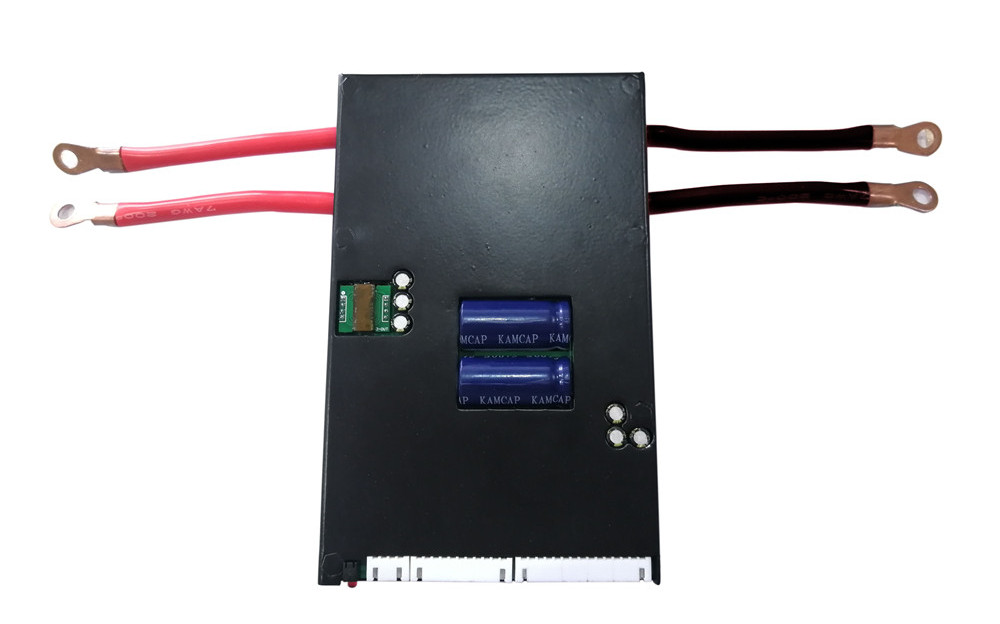 Let's go over the costs for this:

The main missing components at this time are the solar charge controller and the inverter, so let's look at those next. Since we're building a large array, we need a MPPT charge controller that can handle the amount of power the array can output. I wanted a controller that can preferably handle up to 100A to the battery, and use two of those to manage the potential full 10kW (not that we really ever see that). This took some time to find, since most of the devices on the market are priced well above that. Others that are cheaper either don't handle the power, or just don't have the quality or reliability. That is, until I came across MUST Energy Tech Co. Equipment:

They also have smaller 80A and 60A versions, and they come with a RS-485 interface and software to configure them. They also have a temperature probe which can be used to shut off the charge controller in case of abnormal battery temperature (independent from the BMS). 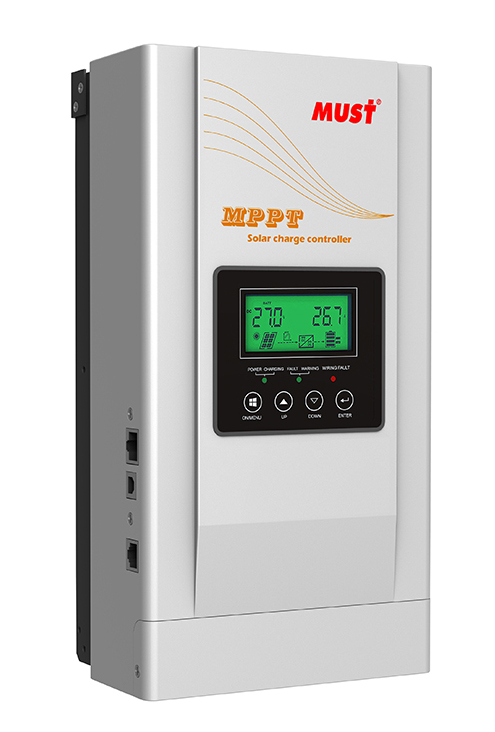 This controller has a maximum input of 150V, so that limits me to putting two panels per string (series) with the rest of these strings in parallel in two groups of 5 each - one group per charge controller. Was I skeptical: you bet. Do they perform as advertised, to my surprise, yes. These are great devices especially considering the price, quality of the build and great support from the company.

Another item that I was very skeptical about was the inverter. I wanted an inverter that can handle 5kW continuous and has some margin for higher peak power from pumps etc. I would normally go with a more expensive (so called) low frequency inverter, but decided to find a 5kW high frequency inverter instead, but one that advertised itself to handle at least double the amount of rated power for these surge peaks - so 10kW, albeit for a much shorter time compared to a typical low frequency inverter. I found one: 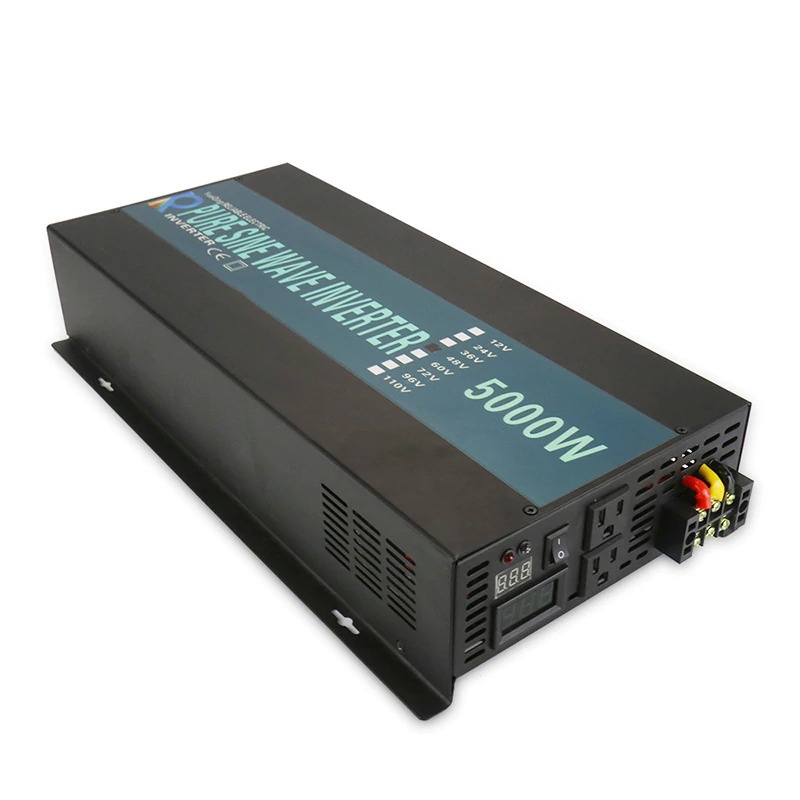 Incidentally, during my search I also found a low frequency inverter, from the same company the charge controller came from: 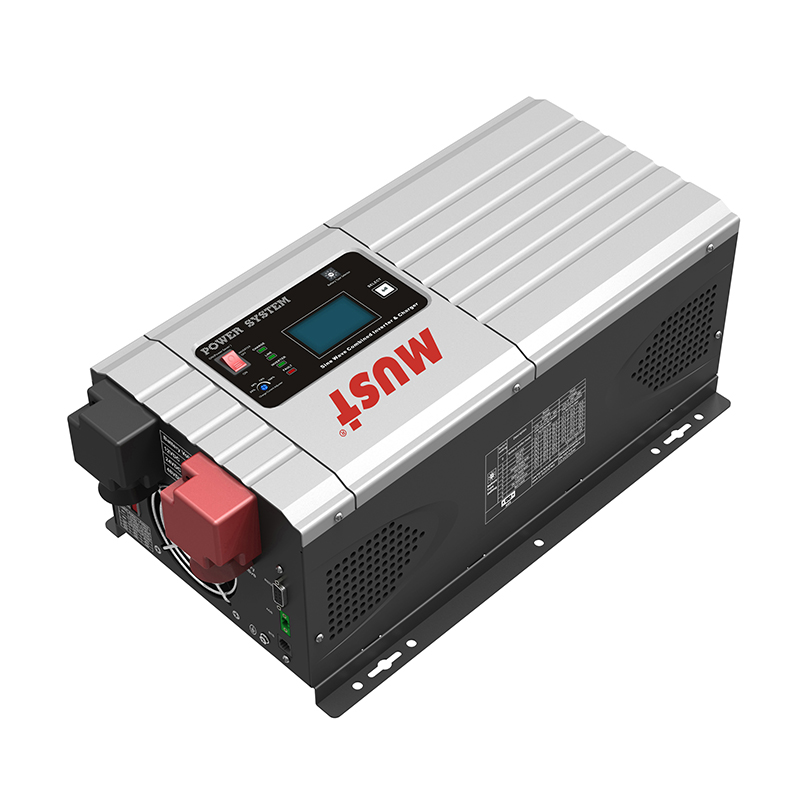 The latter one has the added advantage of also being able to work as a battery charger when coupled to the generator, so that means one less component to source. You could even get them both, just in case...

Adding this all together brings the total to €8676. The downside of course is that you have to put time and effort into sourcing the components, dealing with/learning importing/tariffs/incoterms, and building the system yourself. This can be a daunting process, however, anyone can learn this - just don't rush into it and buy things before you do your research. For one, I highly recommend anyone trying something similar to join diysolarforum.com. Lots of people there share their experiences - me included.

Is this it? No, there are a few other components such as wiring, fuses, tools, and of course the generator (around €400 from a local store). However you should still come to within the €10k goal with these added in. From experience with the above components, they all perform according to their claims, and even exceed them. This is definitely not what I expected when I got into this, so I'm pleasantly surprised. Sadly it also means I can't share any pictures of exploded batteries, burnt inverters, etc. :)