An Introduction to Elliptic Curve Cryptography

Some of my research is focused on the implementation issues of Elliptic Curve Cryptography on embedded systems. Since I often have to explain what Elliptic Curve Cryptography exactly is, I decided to write this little introduction on the matter. Maybe this will get the attention of some of my students, and can perhaps get them more interested in the mathematical branch of finite fields in Algebra. 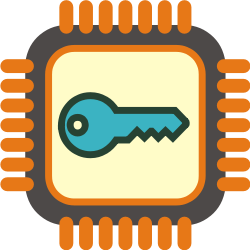 The Diffie Hellman key exchange protocol, and the Digital Signature Algorithm (DSA) which is based on it, is an asymmetric cryptographic systems in general use today. It was discovered by Whitfield Diffie and Martin Hellman in 1976, and uses a problem known as the Discrete Logarithm Problem (DLP) as its asymmetric operation. The DLP concerns finding a logarithm of a number within a finite field arithmetic system.

Prime fields are fields whose sets are prime. In other words, they have a prime number of members. Prime fields turn out to be of great use in asymmetric cryptography since exponentiation over a prime field is relatively easy, while its inverse, computing the logarithm, is difficult. The "Diffie-Hellman Method for Key Agreement" allows two hosts to create and share a secret key. This is done by the following method:

1. First the hosts must get the "Diffie-Hellman parameters": a prime number

, an integer that is smaller than

. They can be hard coded or fetched from a server, depending on the implementation.

2. The hosts each generate a secret private number called

, which is less than

3. Next, the hosts generate the public keys,

. They are created with the function:

4. The two host then exchange the public keys (

) and these exchanged numbers are then converted into a secret key,

can at this point be used as the key for a standard encryption method, used to transfer the information between the hosts. Mathematically, the two hosts have generated the same value for the secret key

Using the values in the equation above, finding the discrete logarithm problem is finding

are known. As an example, take the situation in which someone has multiplied

times, and reduced the result into the field (by performing the modulo operation) as often as needed to keep the result smaller than

. In this case, when knowing

, the problem is trying to find what what value of

was used. This turns out to be extraordinarily difficult to do for  large enough values of

is prime. It is in fact so much more difficult to do than just finding

that, even using the world's fastest supercomputer, it would be unfeasible to attempt within a reasonable amount of time.

Mathematically, a proof to this effect is neither known nor thought to be forthcoming. Before wide-scale implementation, it is thus of the utmost importance that an extensive investigation of the true complexity of the problem is done in order to obtain the highest degree of confidence in the security of discrete logarithm based cryptographic systems. Such an investigation is in progress by various researchers around the world.

Since the discovery of RSA (and El-Gamal) their ability to withstand attacks has meant that these two cryptographic systems have become widespread in use. They are being used every day both for authentication purposes as well as encryption/decryption. Both systems cover the current security standards - so why invent a new system? Even though ECC is relatively new, the use of elliptic curves as a base for a cryptographic system was independently proposed by By Victor Miller and Neil Koblitz. What makes it stand apart from RSA and El-Gamal is its ability to be more efficient that those two. The reason why this is important are the developments in information technology - most importantly hand held, mobile devices, sensor networks, etc. Somehow, there must be a way to secure communications generated by these devices, however their computing power and memory are not nearly as abundant as on their desktop and laptop counterparts. A contemporary desktop or laptop system has no problems working with 2048 bit keys and higher, but these small embedded devices do since we do not want to spend a lot of their resources and bandwidth securing traffic.

The operations on which RSA are founded are modular exponentiation in integer rings. The security of RSA depends on the difficulty of factoring large integers which can be done in sub-exponential times. For the ECDLP however, only exponential algorithms are known which means we can use shorter keys for security levels where RSA and El-Gamal would need much bigger keys. For example, a 160 bit ECC key and a 1024 bit RSA key offer a similar level of security. To reach the same level of security than a 15360 bit RSA key, one only needs 512 bit ECC key.

The security of ECC depends on the difficulty of the Elliptic Curve Discrete Logarithm Problem. This problem is defined as follows: let

be two points on an elliptic curve such that

is a scalar. Given

, it is computationally unfeasible to obtain

is the discrete logarithm of

on the curve to obtain another point

This is also the reason a ECC key of 160 bits provides the equivalent protection of a symmetric key of 80 bits, namely because of the methods used to crack

, one must guess at least the square root of the number of points on average to find

. So if the field size is

points. With a 80 bit symmetric key, it takes

guesses to crack it on average. The table below gives a comparison of equivalent key sizes.

Each curve has a specially designated point

called the base point chosen such that a large fraction of the elliptic curve points are multiples of it. To generate a key pair, one selects a random integer

which serves as the private key, and computes

which serves as the corresponding public key. For cryptographic application the order of

, that is the smallest non-negative number

the point at infinity, must be prime.

In point multiplication a point

on the elliptic curve is multiplied with a scalar

on the same elliptic curve, giving

to obtain another point

. Point doubling is defined as adding a point

to itself to obtain another point

be a point on an elliptic curve. Let

be a scalar that is multiplied with the point

to obtain another point

on the curve so that

Point addition is the addition of two points

on an elliptic curve to obtain another point

on the same elliptic curve. This is demonstrated geometrically in the figure below for the condition that 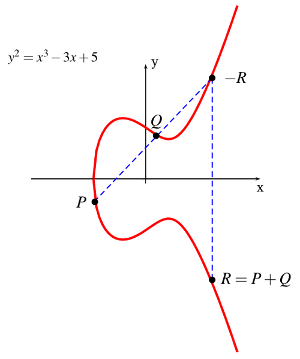 Analytically, we can perform a point addition as follows.

is the slope of the line through

is the point at infinity.
If

then point doubling equations are used.

Also note that the addition is commutative, thus

Point doubling is the addition of a point

on the elliptic curve to itself to obtain another point

on the same elliptic curve. To double a point

on an elliptic curve as shown in the figure below. If the

coordinate of the point

is not zero then the tangent line at

will intersect the elliptic curve at exactly one more point

. The reflection of the point

, which is the result of doubling the point 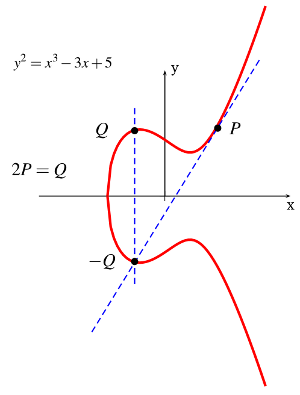 Analytically, we can again write this as follows.

is the tangent at point

is one of the parameters chosen with the elliptic curve.

is the point at infinity.

The field is chosen with finitely large number of points suited for cryptographic operations. Even though the curve would no longer a gently flowing graph, as shown in the figure below, the algebraic equations for point addition and doubling still apply. 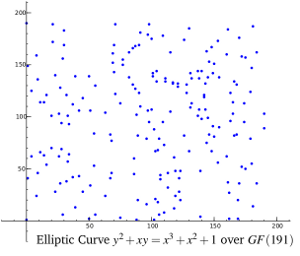 be a prime finite field so that

is an odd prime number, and let

. Then an elliptic curve

defined by the parameters

consists of the set of solutions or points

Together with the extra point

at infinity. The equation

is called the defining equation of

. For a given point

is called the x-coordinate of

is called the y-coordinate of

is chosen such that there is a finitely large number of points on the elliptic curve to make the cryptosystem secure, usually between 112 and 521 bits.

The number of points on

. The addition rule is specified as follows:

Rule to add the point at infinity to itself:

Rule to add the point at infinity to any other point:

Rule to add two points with the same x-coordinates when the points are either distinct or have y-coordinate 0:

This also means that the negative of the point

be two points such that

Rule to add a point to itself (double a point): Let

be a point with

The set of points on

forms a group under this addition rule. Furthermore the group is Abelian, meaning that

What about scalar multiplication of elliptic curve points? These can be computed efficiently using the addition rule together with the double-and-add algorithm or one of its variants.

be a characteristic 2 finite field, and let

. Then a (non-supersingular) elliptic curve

defined by the parameters

consists of the set of solutions or points

together with an extra point

at infinity, with the only elliptic curves over

of interest being non-supersingular elliptic curves. Here the elements of the finite field are integers of length at most

bits. These numbers can be considered as a binary polynomial of degree

. In this binary polynomial the coefficients can only be 0 or 1. All the operation such as addition, subtraction, division, multiplication involves polynomials of degree

The number of points on

. The Hasse Theorem states that:

as it was done for

. The addition rule is specified as follows:

Rule to add the point at infinity to itself:

Rule to add the point at infinity to any other point:

Rule to add two points with the same x-coordinates when the points are either distinct or have x-coordinate 0:

This also means that the negative of the point

be two points such that

Rule to add a point to itself (double a point): Let

be a point with

The set of points on

forms an Abelian group under this addition rule. Notice that the addition rule can always be computed efficiently using simple field arithmetic. As before, scalar multiplication is the process of adding

times. The result of this scalar multiplication is denoted

and can be computed efficiently using the addition rule together with the double-and-add algorithm or one of its variants.

Besides the curve parameters

The domain parameters for elliptic curves over

is the prime number defined for the finite field

are the parameters defining the curve

is the generator point

, a point on the elliptic curve chosen for cryptographic operations and

is the order of the elliptic curve. The scalar for point multiplication is chosen as a number between 0 and

is the cofactor where

The domain parameters for elliptic curve over

is an integer defined for the finite field

. The elements of the finite field

are integers of length at most

used for elliptic curve operations while

are the parameters defining the curve

is again the generator point

is the order of the elliptic curve. The scalar for point multiplication is chosen as a number between 0 and

is the cofactor where

Should we choose a curve over the prime field

or the binary field

? This decision has to be made based on the way the system is going to be implemented. While curves over the prime field can be more efficient to implement in software, there are optimisations possible that puts the efficiency of curves over a binary field on par with those over a prime field.